Accueil > The Sisters of the New Convenant

The Sisters of the New Convenant

On 18 September 2016, Msgr. Habert, Bishop of the diocese of Séez, entrusted the nuns of the Community of the New Convenant with a mission letter, thus confirming 16 years of service at the shrine of Montligeon, amongst other diocesan places.

In the year 2000, the Community  began their thorough service at the shrine especially with supporting divine office facilitation and spiritual counsel.

The Community of the New Convenant was founded in 1994 by Mother Marie-Aimée, and erected in the diocese of Séez by Msgr. DUBIGEON as a public association of faithful. The nuns settled in the village of La Chapelle-Montligeon and developed both a contemplative and missionary life, focused on the adoration of the Holy Host,  endeavoring the proclamation of the Merciful Love of God. In 2000, they took up from the Benedictines of Montmartre with facilitating and supporting the spiritual life at the shrine.   In 2006, the Bishop of Séez urged them to settle permanently in the village; thus, the construction of their first priory began soon after.In June 2019, Sr. Cécile became the new prioress. 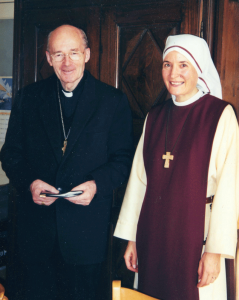 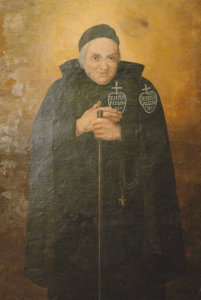 The love of the Eucharist and praying for the deceased

The nuns of the New Convenant live together in a priory according to  the rule of Saint Paul of the Cross, founder of the Passionists. You will easily recognize them in their cream and bordeaux colored habit, symbolizing that of bread and wine. For the liturgy at the basilica, they wear a white habit.

Since 2006 and the bishop’s invitation to settle in the village, the nuns of the New Convenant have endorsed the  vocation of the shrine of Montligeon with praying for the deceased. The Eucharist is indeed their treasure! Riches that they share in a kind of secret fertility with the living and the departed, by means of daily Mass, two Adoration schedules a day,  and praying the divine office seven times a day, either at the basilica or at their priory, always in the presence of the Holy Host.

This presence is updated throughout the day by “Eucharistic attitudes” that Pope John Paul II invited to re-discover and to live of, by means of praising and thanksgiving, lectio divina, communion, and mission.

Both a contemplative and a missionary life

The nuns, in solitude and silence, thus lead a contemplative life according to the rule of St. Paul of the Cross, in a priory in a magnificent environment, close to nature. Through their crafts – bookbinding, sewing, cooking, gardening, household tasks, making jams, etc. –  they continue to deepen their union with God and seek to offer his Merciful Love during their missions.

Our bishop has defined these missions in relation to the various themes highlighted throughout the diocese:

The Sisters and the shrine of Montligeon

The Sisters of the New Convenant are at the core of the spiritual life at the shrine through their facilitation and their partaking in its various activities: